services products cases news careers about us team contact us

Our latest recruit from Australia to Växjö.

I love it, I love programming and it feels like I belong.

Q: Tell us about yourself?

My name is Stewart Borle or [Bårle] depending on who you ask in the family, it can also be pronounced as [Bårlee], [Burlee], [Burley]. Anyway, I am from Perth, Western Australia, turned 22 recently and have been programming and dealing with computers pretty much all my life. My dad set up two computers when I was young, one Windows and one Linux, I used those for a while I stuck with that for a while until I ended up doing my own thing. I’d take components home from the recycling center and ended up using the best components to build the best computer. This quickly grew to a passion but programming itself started when I was around 14 years old. I was in math class and then Mr. Cameron came into my class, found me and said, “Hey Stewart, I'm having a class in informatics that you'd be really interested in taking.” So, I started this class and that opened my eyes to the computing world, and I figured - this is what I love. I decided I'm going to pursue this, and I applied to go to Murdoch University. I started studying computer science, spent years studying there and then the opportunity to do exchange studies came up. I felt like I wanted more out of life, many of my schoolfriends went over east studying the other side of Australia and I really wanted to see something new. So, I thought – “All right, I'm definitely going on exchange”. I had a list of countries I could go to and Sweden was on the list. It was the one country that I knew the least about, and I figured I had the most to gain and learn from coming to Sweden. So, I went to Linnaeus University in Växjö and was turning 19 years old at the time.

While I was studying in Växjö and was about to finish my studies, I realized that I had the opportunity to stay in Sweden as Växjö is cool. I like learning and it's cool to be in a new place, having a language to learn, and being in Europe which is great. Australia is very isolated if you compare it with Europe. The closest big economies to Australia are China or Japan where the culture differs a lot which results in opportunities to connect and getting involved is tougher. So, it's Australia and New Zealand and that's all you've got.

After being in Sweden for a while the opportunity came up with Softwerk and it feels like I've come to the right place. I love it, I love programming and it feels like I belong. Now, you can finally say I'm 120 percent ready to start doing the thing that I'm meant to do.

And now to the fun-and-get-to-know-you-better questions!

Q: Besides coding, what is the best thing you know?

Hmm so it can’t be like super similar programming, electronics? [Laughs] Then I would say paragliding!

Q:  And when you were a kid, what did you want to become when you grew up?

Fighter pilot. Yeah. I wanted to fly fighter jets for a living.

Q: If you could trade places with anyone for a day, who would you choose?

I would have to pick someone flying a helicopter in a situation where they get a lot of freedom in their flying.

Q: What is your favorite food?

What is my favorite food? That's a good question, but the thing is, that depends on the mood. But I think I do have a favorite recipe. When I was young, my grandmother used to make these chocolate balls and they are better than any other chocolate balls that I've ever had in my life.

Q: What is the best location that you have visited?

Sweden! But if I must choose a specific location, I will say Las Vegas. It was a very long time ago, but I did really like Las Vegas.

Q: And lastly, as you are new here in Växjö describe our beloved city with three words.

The Funkiest vibrant town. You can just tell it feels different. It's hard to explain though. But Växjö has that new city vibrancy. It's got the energy. It's got the culture. And that's really amazing to see in a small town, kind of in the Swedish countryside. You can walk 45 minutes or take your bike for 20 minutes in just about any direction to reach any services or you find yourself in a wonderful, pristine forest. So, it's got a lot of the good stuff! 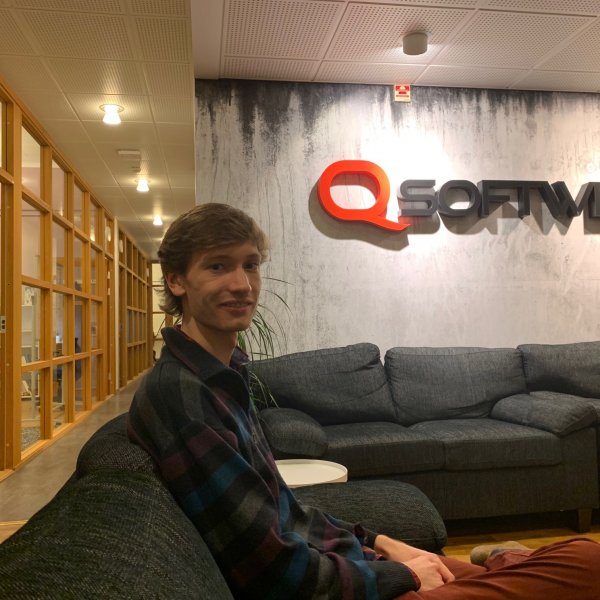 This website uses cookies to offer you the best possible user experience. If you continue browsing the site, you agree to the cookie usage. More info